Child refugees: who are the “unaccompanied minors” at our border? 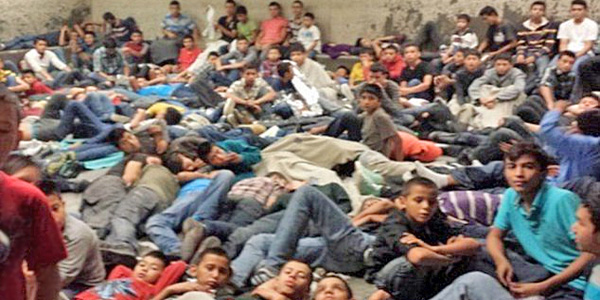 This blog is the first in a three-part series on Migration and the Catholic Church.  The Conference acknowledges this is a controversial and multi-faceted topic. We have included numerous links to provide readers with more in-depth information.

This summer’s news cycle has been dominated by a humanitarian crisis that continues to unfold at the southern border of the United States.  Thousands of children, many unaccompanied, have entered the US fleeing a wave of unprecedented violence in the Central American nations of Honduras, El Salvador, and Guatemala.  The Catholic Church in the United States is especially concerned about the plight of unaccompanied child migrants, and this blog will discuss who these children are, why they are entering the US, and how the Church is responding to the crisis.

An unaccompanied child or minor is a precise term referring to children who migrate without the presence of a parent, primary caregiver, or other adult responsible for their care.  Some children enter with parents or other caregivers; these children are not considered to be unaccompanied minors.  Unaccompanied children should be treated differently than other groups entering the US for two reasons.  First, as children without adult care and protection, the government bears some responsibility for their well-being.  Secondly, we treat persons who enter our country to escape violence and persecution differently than other categories of migrants.  Unaccompanied children who are refugees, asylum seekers, or victims of human trafficking are protected by US law and may legally remain in the US.

A recent poll conducted by Public Religion Research found that 7 out of 10 Americans view unaccompanied child migrants as refugees and 75 percent of American Catholics believe the children should be offered food and shelter while awaiting formal determination of their refugee status.  While some children may enter the US seeking better economic opportunity, the recent wave of unaccompanied migrants from Central America have been pushed out of their own countries by increased violence directed at children. A US Conference of Catholic Bishops (USCCB) delegation visited Central America in 2013 and compiled a report on the child-directed violence in several countries. The delegation found that violence was a key factor in child migration, exacerbated by the inability of family and government systems-including child welfare systems- to protect children from gang-directed violence, domestic violence, and human trafficking.  Additionally, the delegation concluded that “a significant number” of youth have valid asylum claims.

The USCCB is one of two faith-based agencies working with the US Department of Health and Human Services to assist and advocate for these children. However, children cannot be given services until they have been determined to be eligible to remain in the country.  Unfortunately, the government response to this crisis has been focused on reducing protections available under certain laws, like the Trafficking Victims Reauthorization Act.   The only way to ensure that refugee children are protected is to grant proper due process proceedings to all children entering the border.  Additionally, the US must work with foreign governments to implement systems designed to protect children and families.  As a Church, our advocacy for children must transcend nationality, race, and ethnicity to ensure that all are protected from violence and provided with basic services.