Debunking the myths about same-sex marriage

During each of the last several Virginia General Assembly sessions, the Virginia Catholic Conference successfully opposed legislation to repeal Virginia’s constitutional amendment preserving marriage as the institution of one man and one woman. But we know the battle isn’t over. In March, the U.S. Supreme Court heard oral arguments in two cases regarding the definition of marriage. Around the same time three state legislatures – in Rhode Island, Delaware and Minnesota –redefined this God-created institution. During this flurry of activity, supporters of same-sex marriage have mischaracterized the debate over the institution of marriage, and the intentions of traditional marriage advocates, primarily the Catholic Church.

Let’s debunk the most prominent myths promoted by today’s culture.

MYTH: The Bishops are “out of touch” with the culture.

The vocal opposition by the U.S. Bishops to efforts to redefine marriage despite widespread support in pop culture has led to charges that the Catholic Church is “out of touch” with her flock and the culture. This couldn’t be further from the truth. The debate over same-sex marriage isn’t about love and commitment; it’s about mothers and fathers and children and the unique role marriage plays in society. The Bishops are meeting the culture head on by engaging in a vital debate about the meaning of marriage and why its definition matters.

The idea that legal acceptance of same-sex marriage is “inevitable” is widely accepted by much of the media, the entertainment industry, and others. Recent polls claim to support this notion. However, the brakes were applied to this idea when the Illinois state House failed to bring legislation redefining marriage to the floor for a vote last week – despite an extensive campaign by same-sex marriage advocates and the support of President Obama. At the same time, the pro-same-sex marriage Huffington Post recently conducted a poll that found the majority of Americans opposing government recognition of same-sex marriage.

Perhaps the most popular myth launched by some same-sex marriage proponents is that those opposed to ‘marriage equality’ are hateful, intolerant and bigoted. Unfortunately, many of these same advocates yell “Homophobe!” “Hater!” or “Bigot!” to shut down debate. But debate we must. Marriage isn’t a man-made creation; as Archbishop Salvatore Cordileone says, it is an institution created by God and knowable through natural law, which has “a power written on the human heart that does not go away.” As such, the Church’s teaching about same-sex marriage does not stem from animosity, but from an understanding of God’s plan as reflected in natural law. All human beings are equal in their God-given dignity. It is wrong to discriminate against persons, but it is right and necessary to distinguish between different kinds of relationships. God designed the marital union between man and woman as the building block of the family and the most basic institution of society. Our responsibility is to preserve this original design, which existed long before any nation, religion or law was established.

Our marriage debate must be civil and respectful. We can’t resolve the question based on how we feel. Instead, we look to the Truth, written in our hearts and natural law, which tells us all human beings have inherent dignity, and that God has shown us His plan for life, marriage and family. Some say we are on the wrong side of history. Let’s be on the right side of Truth. 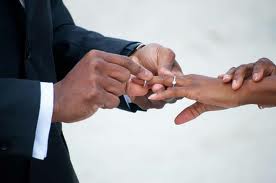