Following our Pope on his historic U.S. visit – along with millions of others

Last week, the world was fixed on Pope Francis as the Holy Father made his historic Apostolic Journey to the United States.  Everywhere Francis was greeted by jubilant crowds of all nationalities, races, traditions and ages.  Happily, in addition to the thousands of pilgrims from both Dioceses who attended the papal events, several Virginia Catholic Conference staffers were there, too.

As with all other pilgrims, attending the events required setting early morning wakeup alarms and good walking shoes. But these small sacrifices paid off with many graces!

On Wednesday, when President Obama greeted the Pontiff at the White House, Conference Executive Director Jeff Caruso and Associate Director for Communications Diana Snider were privileged to watch the ceremony from the South Lawn. In his first public remarks, Pope Francis expressed solidarity with American Bishops when he spoke of America’s first freedom, religious liberty, saying,

“…American Catholics are committed to building a society which is truly tolerant and inclusive, to safeguarding the rights of individuals and communities, and to rejecting every form of unjust discrimination. With countless other people of good will, they are likewise concerned that efforts to build a just and wisely ordered society respect their deepest concerns and their right to religious liberty. That freedom remains one of America’s most precious possessions. ” 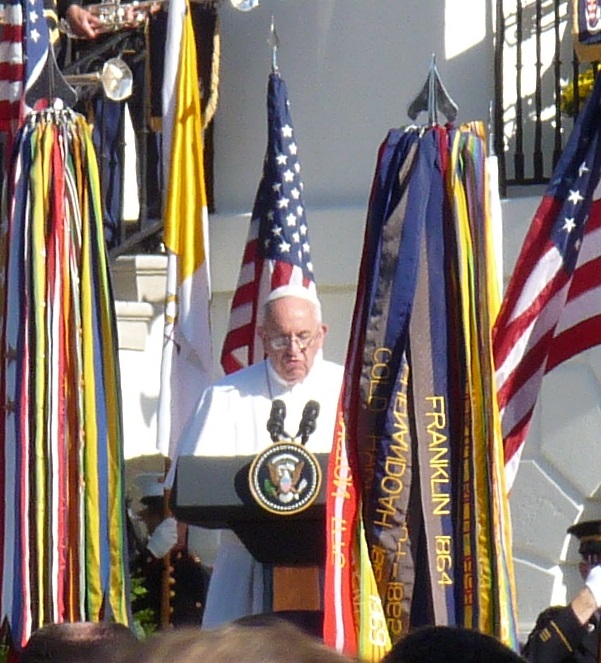 Following a canonization Mass on Wednesday for St. Junipero Serra, the California missionary who brought the faith to California, Pope Francis became the first Pontiff to address a joint session of Congress on Thursday.  Conference Associate Director Michael Lewis joined an exuberant crowd of thousands to watch the historic address from the West Lawn of the U.S. Capitol and greet the Pope afterward when he appeared on a Capitol balcony.

While praising America’s founding and heritage modeled by such civic and religious leaders as Abraham Lincoln, Martin Luther King, Jr., Dorothy Day and Thomas Merton, Pope Francis challenged all lawmakers to cooperate in advancing the common good by addressing “our many geopolitical and economic crises.”  Echoing Pope St. John Paul II the Holy Father called for a “global abolition of the death penalty.” He advocated a humane and compassionate approach to refugees, immigrants and those trapped in poverty. Our nation’s response to immigrants, he said, should be welcoming and exemplify the Golden Rule: ‘Do unto others as you would have them do unto you.’” (Mt: 7:12)

“Let us treat others with the same passion and compassion with which we want to be treated….In a word, if we want security, let us give security; if we want life, let us give life; if we want opportunities, let us provide opportunities. The yardstick we use for others will be the yardstick which time will use for us. The Golden Rule also reminds us of our responsibility to protect and defend human life at every stage of its development.” 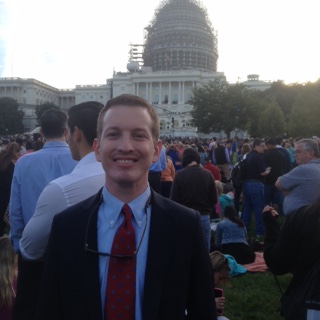 Associate Director Michael Lewis on the West Lawn of the Capitol

Citing his recent encyclical, Laudato Si’: On Care for Our Common Home, the Holy Father urged Congress to engage in a “conversation which includes everyone.”  He noted, “Now is the time for courageous actions and strategies, aimed at implementing a ‘culture of care’ and ‘an integrated approach to combating poverty, restoring dignity to the excluded, and at the same time protecting nature.’”

The next day in New York, Pope Francis addressed world leaders at the United Nations General Assembly. He reminded them that advancing the common good, alleviating poverty and protecting our common home requires we “recognize a moral law written into human nature itself, one which includes the natural difference between man and woman, and absolute respect for life in all its stages and dimensions.”

Later Pope Francis greeted tens of thousands in Central Park, including Conference Office Manager Lynne-Marie Liggan, a native New Yorker. “We were corralled and herded, just to see him for not even one minute, but it was worth it,” she told the New York Times.  “Amazing grace abounded!” she wrote in an email while en route back to Richmond.

On Saturday, Pope Francis arrived at his ultimate destination, the reason for his U.S. journey: the 8th World Meeting of Families in Philadelphia. In a homily and an evening address, Francis spoke of the most sacred institution and treasure, the family. The next day, he celebrated Mass before hundreds of thousands of people who spread across the Benjamin Franklin Parkway.

During his trip, Pope Francis visited a homeless shelter, a Catholic school, the Little Sisters of the Poor, a prison and a seminary.  He also met with victims of clergy sexual abuse to once again seek forgiveness for the sins of priests and bishops.

Pope Francis’s Apostolic journey to the U.S. was a grace-filled time. May it continue to bear fruit for the Church and the world for many years to come.