March for Marriage shows we must continue to defend timeless institution 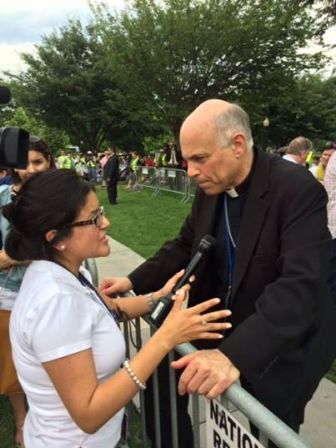 Advocates for marriage from varied backgrounds, ethnicities and faith traditions joined the national Marriage March in Washington DC last Thursday, despite widespread accusations in the secular press about the “bigots” who rallied and marched.  The second annual March for Marriage was organized by the National Organization for Marriage (NOM) and co-sponsored by several allied groups, including the U.S. Conference of Catholic Bishops’ Marriage Unique for a Reason initiative.

Virginia Catholic Conference associate director Michael Lewis and assistant for communications Diana Sims Snider represented the Conference at Thursday’s event, which garnered about 2,000 people from as far away as Iowa, New Jersey and Pennsylvania.  For Virginians, the March was timely, as the state awaits a federal appeals court ruling on a case challenging the Commonwealth’s constitutional amendment defining marriage as a union of one man and one woman.  Several religious and political leaders gave remarks at the rally, most notably Archbishop Salvatore Cordileone of San Francisco, as well as former Gov. Mike Huckabee and former Sen. Rick Santorum.

The Archbishop, chair of the USCCB subcommittee for the Promotion and Defense of Marriage, urged marriage proponents to join him in speaking up to friends and family in charity and truth about the meaning of marriage and its importance to society. “You, too,’’ he told us in a short conversation later when we urged him to keep up the good fight on marriage. “You are not exempt.”

“The question is… Does society need an institution that unites children to the mothers and fathers who bring them into the world, or doesn’t it? “Archbishop Cordileone said to the gathered crowd. “If it does, that institution is marriage — nothing else provides this basic good to children.”

Summing up the Church’s message and its critical importance to the common good, the Archbishop said, “We now in our own time need to proclaim and live the truth with charity and compassion as it applies to us today: the truth of a united family based on the union of the children’s father and mother in marriage as the foundational good of society.  Every child comes from a man and a woman, and has a right, a natural human right, to know and be known by, to love and be loved by, their own mother and father. This is the great public good that marriage is oriented towards and protects.”

The Archbishop’s appearance was not without public controversy, however.  A group of public officials who support redefining marriage, including California Lieutenant Governor Gavin Newsom, San Francisco mayor Ed Lee, and other California officials urged the Archbishop to cancel his appearance at the March.  In a separate letter, House Minority Leader Nancy Pelosi characterized the event as “vitriol masquerading as virtue.”  In a letter responding to critics the Archbishop said Church teaching requiring respect and protection for all people also required him to proclaim the whole truth about marriage “in season and out of season, even when truths that it is my duty to uphold and teach are unpopular, including especially the truth about marriage as the conjugal union of husband and wife. That is what I will be doing on June 19th.”

The importance of the March was underscored by the recent torrent of judicial opinions from around the country aimed at redefining marriage. These decisions are expected to be appealed to the U.S. Supreme Court, to which marriage proponents marched Thursday to demonstrate support for the truth about marriage.

While we are called to treat our neighbors with dignity and respect – including those with same-sex attraction – that respect does not mean redefining marriage. Marriage as the union of one man and one woman is written in natural law and precedes the establishment of any state or religion. It cannot be redefined by any individual, church or government, as Bishops DiLorenzo and Loverde said in their 2006 pastoral letter, The Institution of Marriage and the Common Good.

As we await a decision from the federal appeals court, let’s continue to stand, speak up and pray for God’s design for marriage during this third Fortnight for Freedom!