Protecting the vulnerable and care for creation: Striking a balance

by admin | Sep 17, 2014 | Catholic social teaching, Economic justice, From the Tiber to the James, Living the faith, Uncategorized 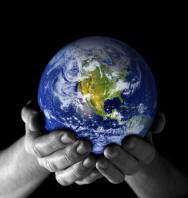 This is the second post in a three-part series exploring the seventh theme of Faithful Citizenship, care for creation, and discussing how Catholics can use the resources God has blessed us with responsibly to meets our needs and preserve a clean and hospitable environment for future generations.

Last week’s blog post explored the seventh theme of Faithful Citizenship, care for creation – a theme that is often forgotten, or worse, ignored. We Catholics have a moral duty to protect God’s creation for future generations while meeting the social and economic needs of the current generation.  In other words, exercising care for creation is a balancing act that requires that policies aimed at protecting the environment give special concern and deference to the most vulnerable in our society.

The role of carbon pollution in climate change has been hotly debated in the media.  Many experts have offered studies and observations of the effects of carbon pollution on rising sea levels, drought, and other extreme weather events. Yet some contend that because carbon dioxide is a naturally occurring gas, human activity is insignificant as a factor in the extreme climate events we have observed around the globe.  Regardless of the cause, we must address the stress we put on the environment now. By 2100 thousands of U.S. coastal cities—including Virginia’s own Hampton Roads communities— are predicted to be submerged by the tides, threatening the livelihood of millions in future generations.

Some have criticized the U.S. Conference of Catholic Bishops’ call to address global climate change as job-killing or an attempt to increase government control of industry. But the Bishops recognize that special care must be taken to ensure that efforts to combat climate change don’t adversely affect the poor and vulnerable and developing nations.  As the Bishops remind us, “…[G]lobal climate change is not about economic theory or political platforms, nor about partisan advantage or interest group pressures. It is about the future of God’s creation and the one human family. It is about protecting both ‘the human environment’ and the natural environment.  It is about our human stewardship of God’s creation and our responsibility to those who come after us….Action to mitigate global climate change must be built upon a foundation of social and economic justice that does not put the poor at greater risk or place disproportionate and unfair burdens on developing nations.”

Recently, the U.S. Environmental Protection Agency proposed a “Clean Power Plan” to reduce by 30% the amount of carbon emissions from coal-fired power plants by 2030. While the USCCB has not endorsed the proposal, it has applauded the opening of dialogue on the issue. In a letter to EPA Administrator Gina McCarthy, Miami Archbishop Thomas Wenski outlined a framework by which proposals ought to be designed in order to ensure economic and social justice.  Respect for human life and dignity, prudence on behalf of the common good, priority for the poor and vulnerable, and preserving social and economic justice by protecting workers and the poor from undue burdens must be the guidelines by which we design and implement efforts to combat climate change.

Our call to preserve God’s wonderful gift of creation does not mean implementing policies that disregard social and economic costs. It does mean we must work together to find prudent solutions that both preserve creation for generations yet unborn, while protecting jobs and preventing undue economic hardship.  As St. Pope John Paul II said in “The Ecological Crisis: A Common Responsibility,” “[R]espect for life and for the dignity of the human person extends also to the rest of creation, which is called to join man in praising God.”