Undercover videos bring us back to cruel reality: Aborting babies is big business and is happening where we live 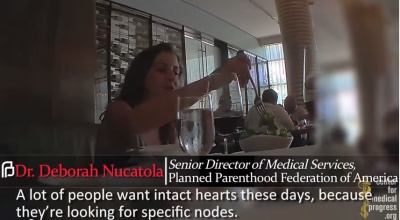 Like many others, I was horrified after watching two undercover videos in which Planned Parenthood officials nonchalantly discussed harvesting and distributing body parts of aborted babies for research.  Produced by the pro-life Center for Medical Progress, these videos, one released last week and the second released this week, contain jarringly graphic descriptions of what happens during an abortion and how some abortion providers work to “save” the organs of the tiny babies they then discard.

Some of the video content, discussed over salad and drinks, is so sickening and ghoulish that it seems surreal.  In our everyday lives, sometimes it’s hard to differentiate the real and the unreal.  These days many of us are constantly flipping back and forth on our TVs, tablets, smartphones and social media feeds between opinion and fact, fiction and nonfiction, news and sensationalism. It all blurs together sometimes.  We might be tempted to convince ourselves (even if for only a moment) that these descriptions are so grotesque these practices “can’t be true.”

But these horrific videos once again bring home the truth: Abortion – in all of its horror – really is real.  It’s not a theoretical concept, a “social” or “cultural” issue or the topic of a slogan on a bumper sticker.  It’s not a war of words pitting “pro-life” and “pro-choice” sides trying to score points against each other in public campaigns, opinion polls or talk shows.  No, abortion is a tragic reality that every day causes 4,000 children in this country alone to lose their lives.

Infinitely more important, though, is this fact: Jesus is also real, and he “came so that they might have life and have it more abundantly.” (John 10:10)  This reality compels us to act: We can pray for an end to abortion; we can advocate for state and federal protections for unborn lives and an end to taxpayer funding of abortion and Planned Parenthood; we can respect the gift of life in numerous ways each day by being a life-affirming, life-giving example, persuading others with compassion and love.  Every time Jesus becomes “more real” to others through the Gospel of Life we live, abortion and Planned Parenthood become less real.