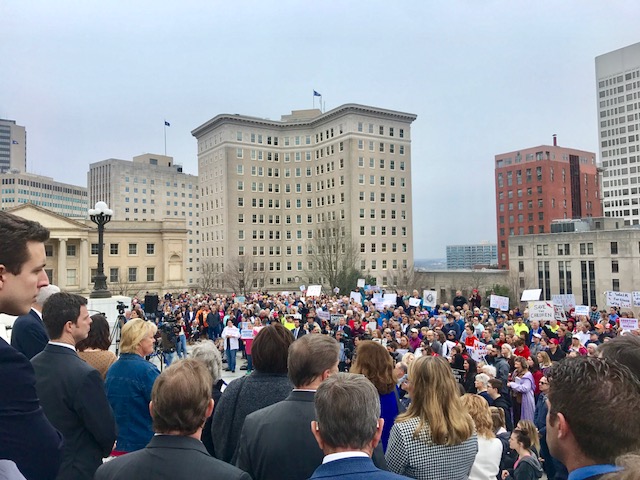 RICHMOND, VA. – March for Life is excited to partner with The Family Foundation, the Virginia Catholic Conference, and the Virginia Society for Human Life for the second annual Virginia March for Life on February 13, 2020 in Richmond, Virginia. Marchers will rally at the state capitol to stop extreme abortion legislation. Bills have already been filed to ratify the Equal Rights Amendment, to remove necessary, life-saving parental consent and ultrasound informed-consent requirements before an abortion is performed, to eliminate health and safety standards for abortion facilities, and even to establish the “right to personal reproductive autonomy” in Virginia’s constitution.

After the recent Virginia election results, the majority made their priorities clear by filing the pro-abortion Equal Rights Amendment as their first bill. The ERA would endanger every rational pro-life law in Virginia and enshrine abortion in the U.S. Constitution. If Virginia attempts to ratify this moot amendment, the Commonwealth may enter into a season of expensive litigation and see many legal protections now enjoyed by women completely erased. March for Life, The Family Foundation, the Virginia Catholic Conference and the Virginia Society for Human Life are calling upon all pro-life Virginians to stand against all legislation that threatens the inherent God-given dignity of the human person, especially the most vulnerable among us, the unborn. The march will take place right after the legislature’s critical cross-over period between the House and Senate, thereby allowing participants to advocate in person with their elected representatives.

March for Life President Jeanne Mancini:
“It is exciting to be able to partner with Virginia’s pro-life groups at a time when much is at stake in this state. Pro-abortion politicians who now control both the legislature and governor’s mansion haven’t been shy about their intentions to push forward an extreme abortion agenda, and their willingness to deny basic rights to the unborn is no secret. We will work tirelessly to stand up for the state’s most vulnerable citizens until the day when our government and politicians recognize and protect all innocent, human life.”

The Family Foundation President Victoria Cobb:
"Now, like never before, Virginians who value unborn life must come together and stand against the abortion industry's march toward making abortion legal for any reason at all stages of human development even into the moments of labor and delivery."

Virginia Catholic Conference Executive Director Jeff Caruso:
“Constituents from every community in our Commonwealth: Come pray, come advocate, come witness for life! As Virginians and citizens of faith, let’s lift our voices together to defend the dignity, the sanctity and the immeasurable value of every life. Now is a critical time to ensure our voices are heard, we are witnesses to the faith, and that the rights of the unborn and the most vulnerable are not once again trampled upon! Start the day with us for a 9:15 Mass at the Richmond Convention Center, concelebrated by Bishop Knestout and Bishop Burbidge.”

Virginia Society for Human Life President Olivia Gans-Turner:
“Pro-life people will not stay quiet as pro-abortion forces attack all our reasonable and protective pro-life laws in Virginia. We will be seen, and heard in Richmond, as we stand together to defend every innocent human life from conception to natural death.”

The Virginia March for Life will start with a rally at 11:45 am ET, followed by a march at 12:45 pm ET. More details, including a list of speakers, will be announced soon.

Learn more about the Virginia March for Life here.