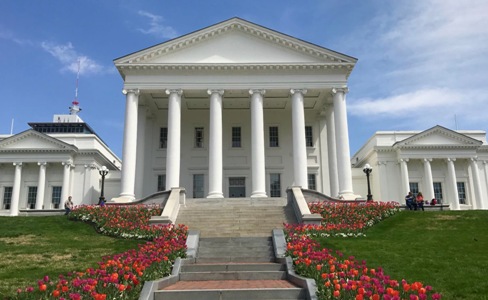 Within the next few days, the 2021 Virginia General Assembly session is expected to end. Thank you to everyone who acted on our many alerts over this fast-paced session. Regardless of outcome, each contact you made was a vital act of faithful citizenship and an opportunity to change minds and hearts. Below are recaps on the four issues that occupied most of our time this session. In the weeks ahead, we will provide vote charts displaying how your legislators voted on these and other important issues.
Abortion: Identical abortion expansion bills – SB 1276 and HB 1896 – passed both chambers, most recently by votes of 22-17 (Senate) and 55-45 (House). Bishop Burbidge and Bishop Knestout issued statements upon initial Senate passage and initial House passage. This legislation, now on the Governor’s desk, allows plans participating in Virginia’s health insurance exchange to cover abortion without any limits. It tragically wipes out abortion coverage restrictions we helped establish 10 years ago for exchange-participating plans, many of which are subsidized with taxpayers’ money. Please take action to urge Governor Northam to veto this drastic expansion of abortion coverage that would force taxpayers to fund plans that cover abortion on demand!
Death Penalty Abolition: Identical bills to abolish Virginia’s death penalty – SB 1165 and HB 2263 – passed both chambers, most recently by votes of 22-16 (Senate) and 57-43 (House). Bishop Burbidge and Bishop Knestout issued a statement upon initial passage by both chambers. Enactment of this historic legislation, now on the Governor’s desk, would make Virginia the first southern state to end its death penalty. Governor Northam has already publicly indicated his support of this measure.
Threat to Adoption Conscience Protections: HB 1932 would have repealed a conscience law we championed in 2012 that Catholic Charities and other faith-based adoption and foster care agencies rely on to do their outstanding work. The House passed the repeal bill 53-43, and the Senate committee it was referred to then passed a modified version of it. However, the full Senate subsequently decided to recommit the bill back to the committee, where no further action was taken on it before the session’s deadline for committee action. As a result, the bill was left in committee and there will be no further action on it. We appreciate the prudent decision by the Virginia Senate to forgo floor debate on this highly contentious bill and to recommit it to committee instead.
Marijuana Commercialization: SB 1406 and HB 2312 – bills to commercialize marijuana in Virginia – are in conference and expected to pass in some form. Data and the experiences of other states clearly show that commercialization of marijuana (including highly concentrated THC-infused dabs, edibles and vapes, etc.) would lead to more addiction, mental illness, suicide and traffic fatalities – dangerously harming many children, breaking up families and even ending lives. At the appropriate time, we will send an alert asking you to urge the Governor to veto this legislation.
Stay tuned for our vote chart displays in the weeks ahead!