Welcoming the stranger: using Scripture to guide our immigration thinking 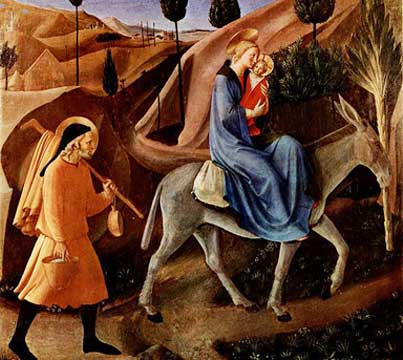 This blog is the third post in a three-part series on Migration and the Catholic Church.  The Conference acknowledges this is a controversial and multi-faceted topic. We have included numerous links to provide readers with more in-depth information.

One of the most dramatic scenes in the Gospel of Matthew occurs after Herod is informed of Jesus’ birth.   The paranoid King, jealous and fearful of a potential rival, orders the murder of all male children under the age of two.  Warned in a dream, Joseph flees with Mary and Jesus down the Roman road to Egypt, where they remain until they can safely return to Nazareth.  While we know little about Jesus’ childhood, this incident is an enduring subject in legend and art.  We don’t know the exact details but we do know that Jesus personally knew and understood the experience of migrants.

Earlier this year, as thousands of child migrants poured across the southern U.S. border, Church leaders recalled the experience of Jesus entering Egypt and how he must have felt as a young Palestinian Jew in a foreign land.  In this post, we’ll examine the Church’s response to migration and present a biblical rationale for a compassionate and welcoming response to all who enter foreign lands.

Immigration is one of the most controversial topics for Catholics in Virginia.  While many view immigration primarily through a political lens, Scripture invites us to see it differently.   Exodus tells the story of people exiled from their home to Egypt where they initially find refuge. But they are discriminated against and enslaved because of their nationality and religion and God leads the Jews out of Egypt and into the Promised Land. Scripture instructs God’s people to remember their time of exile:

Jesus, who studied the Hebrew Scriptures, would have known this commandment from Deuteronomy and understood it in the context of his own sojourn in Egypt.  In Matthew 25, he instructs us to look for him in the face of the stranger and says our actions toward them will be remembered at our judgment.  Paul also reminds us to welcome the stranger, insisting that in Christ there is “neither Jew nor Greek, slave nor free.”  Galatians 3:28.

Yet, throughout the Christian world, particularly in the U.S. and Europe, we see the stranger as a symbol of danger, of otherness, and of economic instability.  Our first thoughts are only of ourselves:  we worry about our jobs, our communities, our language and customs.  “We must take care of our own first!” is our first response.  But is this the response of God’s people? In his homily to North African boat refugees on the tiny Sicilian island of Lampedusa, Pope Francis decried a “globalization of indifference” which prevents us from recognizing the suffering of our neighbors. “Who among us has wept for these things, and things like this? Who has wept for the deaths of these brothers and sisters? Who has wept for the people who were on the boat? For the young mothers carrying their babies? For these men who wanted something to support their families? We are a society that has forgotten the experience of weeping, of “suffering with”: the globalization of indifference has taken from us the ability to weep!”

As a Church, we cannot forget to weep and we cannot fail to act.   That is why the Vatican, the United States Conference of Catholic Bishops, and the Bishops of Virginia through the Virginia Catholic Conference will continue to advocate for immigrants and for public policies that respect the innate human dignity of all.