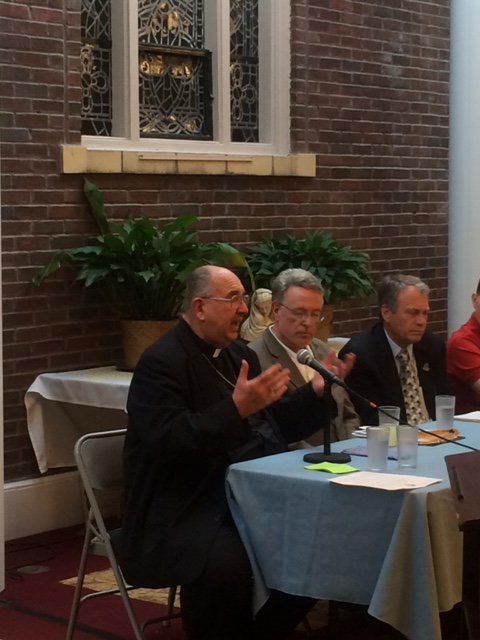 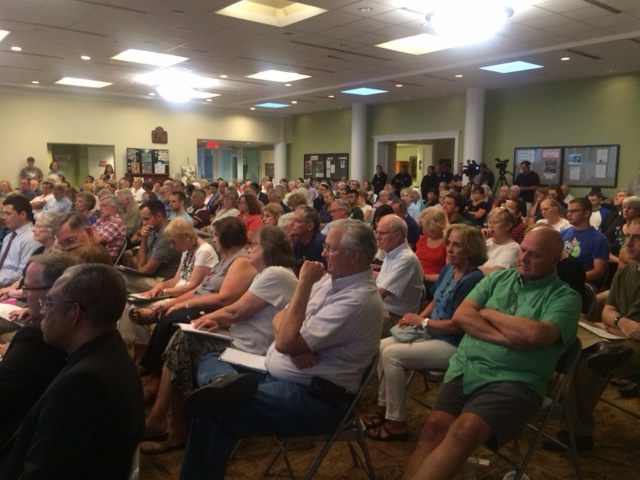 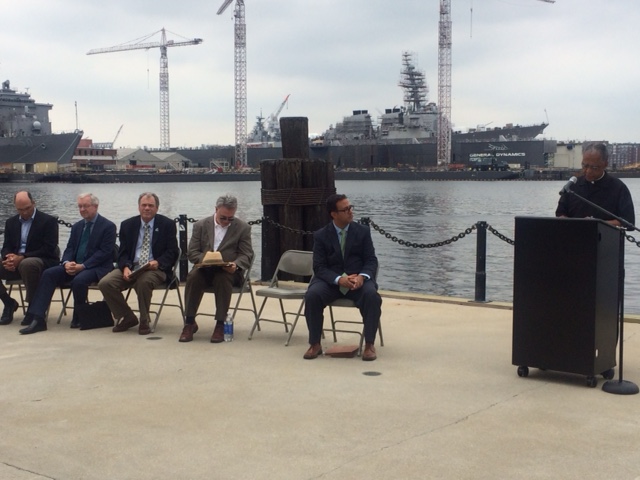 In the midst of competing narratives about Pope Francis’ upcoming visit to the U.S. and his recent encyclical on ecology, Laudato Si’, one point is clear: “The Church is not in conflict with science,” Richmond Bishop Francis DiLorenzo told a crowd in Norfolk Tuesday night. “We must listen to what the scientists are telling us and then use our faith to help us understand the reality that surrounds us.”

Introduced by Monsignor Walter Barrett, Episcopal Vicar of the Eastern Vicariate for the Diocese of Richmond, Bishop DiLorenzo addressed 230 people assembled at Sacred Heart Catholic Church who had come from as far away as Harrisonburg, in the northwest corner of the Diocese. They were in the Tidewater for “Praised Be: How Pope Francis’ Encyclical Speaks to Tidewater’s Looming Environmental Crisis – A Symposium of Church, Military, Scientific and Community Leaders.” Stay tuned for a video recap of the event, sponsored by the Virginia Catholic Conference, the Diocese’s Office of Social Ministry, the Catholic Climate Covenant and Sacred Heart Catholic Church

“Tackling environmental problems is in keeping with the Catholic beliefs that every human being has the right to life, food, clothing, shelter, health care,” Bishop DiLorenzo said. “Pope Francis is not out there beating us on the head telling us: ‘You’ve got to do this, you’ve got to do that.’ He’s saying ‘start a dialogue… because this is our common home.’”

In Laudato Si’, Pope Francis writes, “Living our vocation to be protectors of God’s handiwork is essential to a life of virtue; it is not an optional or a secondary aspect of our Christian experience.” (217) Echoing the Holy Father, Bishop DiLorenzo encouraged all to engage their “friends and neighbors in conversation about what scientists are telling us, and to then explore how the tenets of our faith can apply to solutions.”

The excitement and eagerness to heed the Pope’s call to enter into dialogue about the issues facing our common home was palpable Tuesday night. It comes less than four weeks before Pope Francis’ upcoming visit which includes stops in Washington, Philadelphia and New York, where the Holy Father will address the United Nations General Assembly , where world leaders will be focusing on climate change and sustainable development.

Catholic University of America religion and culture professor Dr. Bill Dinges told those gathered that Pope Francis’ encyclical “elevates the importance of ecological concerns to a new level of magisterial importance, and heightens ecumenical interests towards global environmental challenges and motivates discussion and action with a sense of urgency. “

“This is a moral issue, not just a political one,” Dinges said.

Commander Andy Presby,  a Norfolk resident and Sacred Heart parishioner, recounted how rising sea tides have flooded and damaged his family’s home three times in the past 5 years.  (Commander Presby provided his remarks as a member of the Norfolk community.  His comments are his own and should not be taken to represent the views of the United States Navy or any other piece of the federal government.)

Most importantly, however, all of us should prayerfully consider the Holy Father’s call to dialogue and action by being open to hearing the words Pope Francis has shared with the Church and the world.