This Week at the 2020 Virginia General Assembly--Week 2

This Week at the 2020 Virginia General Assembly--Week 2 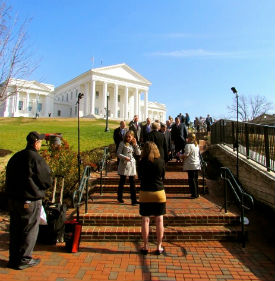 The session’s pace picked up this week with committees hearing and advancing bills and floor votes on a few highly publicized issues. Here is a rundown of Virginia Catholic Conference activities in Richmond this week:

ERA: As expected, this issue’s quick start in week 1 carried into this week. On Wednesday, HJ1 passed the House on a vote of 59-41 and the SJ1 passed the Senate on a vote of 28-12. Each chamber is expected to approve the other chamber’s resolution soon and Virginia would become the 38th state to “ratify” the ERA. However, the time for ratification originally proposed by Congress has long since lapsed and 5 states have since rescinded ratification.  It is undeniable, however, that ERA language has been used by pro-abortion groups to dismantle pro-life laws. We testified against the ERA for this reason and we thank everyone who expressed their opposition through our action alert. We must remain vigilant on the federal legal debate that is very likely to ensue.

Take action now to save religious liberty for faith-based adoption agencies! A subcommittee hearing that had been scheduled for Thursday morning on legislation that would end a law that protects the religious freedom of adoption and foster care agencies was postponed. We anticipate it will be rescheduled soon, and it remains critically important to take action to stop this extremely harmful bill now!  Current law ensures that no agencies – including faith-based agencies that follow the teaching that marriage is between a man and a woman – are forced to participate in placements that violate their beliefs and moral convictions. We must keep this law in place and stop the repeal bill.

Background checks and extreme risk protective orders: On Thursday afternoon, the Senate passed firearm background check legislation – a measure we have long supported – on a bipartisan 23-17 vote (link to vote not yet available). Another bill we supported that would create a legal framework for temporarily keeping firearms away from people in crisis was reported from a Senate committee on Monday and awaits floor action. Extreme Risk Protection Orders would give loved ones the tools to protect individuals when they pose a substantial risk to themselves or others.

Transgender policies in public schools: A Senate committee voted 10-5 on Thursday to approve a VCC-opposed bill that would require the Virginia Department of Education to issue transgender policies and procedures that could force children to share showers, locker rooms, hotel rooms and other intimate settings with members of the opposite sex during school or extracurricular activities.  The bill further mandates that all Virginia school boards adopt such model transgender policies by the beginning of the 2021-2022 school year. It will be considered by the full Senate as early as Jan. 22.

Ban on conversion therapy: Also on Thursday, a Senate committee voted 9-6 to approve legislation that would prohibit any counseling of those under 18 that would seek to change an individual’s sexual orientation or gender identity, including efforts to change behaviors or gender expressions, or to eliminate or reduce sexual or romantic attractions or feelings toward individuals of the same sex.  The bill would allow counseling to encourage gender transition but ban consultation toward alignment with one’s God-given sex. Under this proposal, even a teenager who wants to grow in chastity and self-control would not be able to receive professional counseling to help achieve that goal. SB 245 would infringe the fundamental right of parents to make healthcare decisions for their children as well as the Freedom of Speech and Free Exercise of Religion of healthcare professionals and the families they serve.  The full Senate will next take up SB 245 as early as Jan. 22.

Attend 2nd annual Virginia March for Life on February 13! Please join us in Richmond for a day of prayer, advocacy and witness for life — featuring a Mass concelebrated by Arlington Bishop Michael F. Burbidge and Richmond Bishop Barry C. Knestout, visits to legislators’ offices, the rally and march. Extreme abortion bills are being considered by the General Assembly this year including: removing parental consent and ultrasound informed-consent requirements before an abortion is performed; eliminating health and safety standards for abortion facilities; and even establishing a “right to personal reproductive autonomy” in Virginia’s constitution.  Come to the march and let your voice be heard!  Check out times and other details at vacatholic.org.