This Week at the 2021 Virginia General Assembly--Week 1

This Week at the 2021 Virginia General Assembly--Week 1 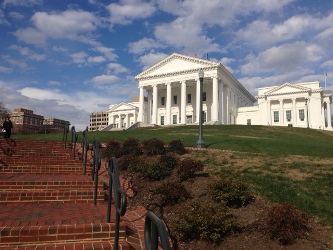 The Virginia General Assembly gaveled in on Wednesday to start its 2021 session. The session has already accelerated quickly. Like everything else, the General Assembly’s operations have been altered by the COVID-19 pandemic. The Senate is meeting at the Science Museum of Virginia instead of their chamber inside the Capitol due to social distancing requirements. The House is meeting virtually. All Senate and House committee hearings are being conducted virtually too. Session rules this year also place tighter limits on the number of bills each member can introduce. Although this narrows the field of play considerably, the bills that are indeed filed are more likely to gain traction. Here are some major issues we’ve been lobbying right out of the gate:

Abortion: Three dangerous abortion expansion bills have been filed so far. One of them, SB 1276, would allow plans on Virginia’s health insurance exchange to cover abortion on demand and was even scheduled for a hearing yesterday. When the bill was brought up, however, it was referred to another committee. Tens of thousands of low- and middle-income Virginians use the state health exchange (a virtual “marketplace” for those shopping for health insurance) to provide healthcare for themselves and their families. The exchange is taxpayer funded. Taxes pay for managing the exchange, and for subsidizing health plans in many cases. Currently, plans participating in the exchange are prohibited from covering most abortions. SB 1276 would remove that prohibition and thereby force taxpayers to fund abortion on demand within the exchange, even though polling consistently shows that Americans do not want their tax money spent on abortions. The bill is very likely to be heard on Monday afternoon. Take action now and tell your Senator that that you do not want your tax dollars funding abortion on demand!

Meanwhile, House committees will soon consider HB 1896 (identical to SB 1276) and HB 1922 – a bill that would expand abortion, sterilization and contraception coverage in Virginia’s Medicaid program and require this coverage in private health benefit plans. Contact your Delegate now to urge him or her to oppose these two bills that expand abortion and violate conscience.

Death Penalty Abolition: SB 1165 would abolish Virginia’s death penalty. As Pope Francis, his predecessors, and the U.S. Catholic bishops have consistently noted, we have other ways to provide punishment and protect society without resorting to executions. The Catechism states that “there is an increasing awareness that the dignity of the person is not lost even after the commission of very serious crimes,” and the Church “works with determination for [the death penalty’s] abolition worldwide.” Please email your Senator now and urge him or her to support this effort!

Adoption Conscience Repeal: Earlier this week, HB 1932 was introduced. This bill would repeal a law the Virginia Catholic Conference helped create in 2012 to protect the religious freedom of adoption and foster care agencies. Current law simply ensures that no agencies—including faith-based agencies that follow the teaching that marriage is between a man and a woman—are forced to participate in placements that violate their beliefs and moral convictions. We must keep this law in place and stop the bill that has been proposed to repeal it.

Currently, no one who wants to adopt or provide a foster home is prohibited from doing so. Preventing families from doing so through a faith-based organization that shares their beliefs would mean less foster and adoptive parents, not more. Please act now to let your Delegate know you strongly oppose this bill and support freedom of conscience for child-placing agencies.

Conscience Rights for Genetic Counselors: During the 2014 session, the Virginia Catholic Conference worked to secure conscience protections for genetic counselors. Though these protections received overwhelming bipartisan support just seven years ago, the situation today is much different. SB 1178, which would repeal these protections, was heard in a subcommittee this morning. The subcommittee voted to advance the bill to full committee, which is expected to consider it next Thursday. Please be on the lookout for more from us on this issue soon!